Why Jesus is the Way to Union with God? 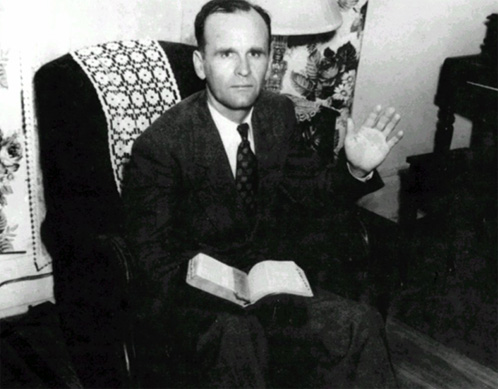 For therefore we both labour and suffer reproach, because we trust in the living God, who is the Saviour of all men, specially of those that believe.

Why Jesus is the Way to Union with

E-10 Now, God had showed Jesus to go away and stay for this amount of time. And many times we think that it’s disappointing when we get down sick or we feel that something has happened. But if you just won’t be discouraged, and remember that all things work together for good to them that love God. The footsteps of the righteous is ordered of the Lord.Now, this little family, as they were in the worst condition they’d ever been in… Lazarus had taken sick, and they sent for their Friend and Buddy. He had set at the table and had eat many times from their table. They had made Him a garment to wear. He laid His head upon the pillows that Martha and Mary had fixed the little needlework, trying to show all the respects that they could to Him. And why would He turn them down, when they were asking a favor?

E-11 Many times we are led to that spot. "Why is it? If I go to church, and I live before God with all my heart, I try to be a just, honest person, and all that Christianity requires, why is it that these things happen?" But you know, many times they are blessings in disguisement. Many times we can’t understand them. If you’ll just let them alone, God will work it out just right.Now, I want you to notice. This perhaps was the darkest hour this little family had ever seen. They’d left their church; their Friend, seemingly, had forsaken them. And all that they held dear was gone; the breadwinner was gone, their brother laying in the grave, and this two little helpless women, excommunicated from the church, marked as a holy-roller, fanatic for following the Lord Jesus… Could you imagine the scornful fingers of the city of Bethany pointing at them? Could you imagine hearing them say, "Now, where is that holy-roller friend of yours? You see, when the showdown comes, He’s gone somewhere else and refused to come, help you."You know that devil hasn’t died since then. He still lives, scornful. But somehow another, when the darkest hour come… After four days the man was rottening in the grave; then they heard that Jesus was coming. And Martha had been dilatory in making ready for different things and so forth in the house, but she showed then what she was made out of. Oh, I believe…

E-12 To you Pentecostal people, that out here in the Methodist, and Baptist, and Presbyterian, and Lutheran churches, there’s a many a Martha out there tonight. I believe when the showdown comes, they’ll show what they’re made out of. I believe it.And when Jesus came to the city, little Martha looked like had a right to go out and fuss at Him, but Martha had read a story once in the Bible; that where a Shunammite woman had lost her son, and the Shunammite woman recognized that God was in the prophet. And if God was in His prophet, how much more was He in His Son. She wasn’t so much about the prophet; she was recognizing the God of the prophet. And she wasn’t recognizing the Man that seemingly had disappointed her, but the God that was in the Man.
Oh, there it is. Not the action of the church, but the power of God that’s in the church. Watch. Oh, in that hour no one knows how to sympathize, unless they have come to that dark hour.

E-13 One time way down in Babylon, there was a scene, a drama being set. And that was, that one morning a furnace had been het seven times hotter than it ever was het–or heated. Then when the issue went forth, that three of the believers of God that was standing firm on God’s eternal promise…Oh, I want you to see it. God has always respected any man who will stand firm on His promise. Oh, it looked like a dark time. When Shadrach, Meshach, and Abednego, with their hands tied behind them, and as it was, the king setting on his throne said, "Now, boys, if you want to make a little compromising here, and would like to change your decision, we’ll give you a chance." But you know, that doesn’t belong, a compromising in the heart of a believer who’s solemnly set on THUS SAITH THE LORD.They said, "Our God is able to deliver us from them flames of the furnace. But nevertheless, we will not bow down to your images."

E-14 Oh, if the world tonight, if you women tonight, if you man tonight… You women, when the devil comes to tempt you when this sun gets a little warmer, to put on these old scandal clothes, and get on the street, and be popular, if you would say, "I’ll take the way with the Lord’s despised few. Regardless of what takes place, I made my decision for Christ."And if you men would get that wishbone out of your back, and a backbone in it, and would take your wife by the hand, and not let her do such a thing, God would respect you more for doing it. You know that’s right. There is times when man’s got to stand and the devil will toe the mark with you.

E-15 So with their hands tied behind them on the death march, when the king called for the most able-bodied men that he had in his army to push them into the fiery furnace… And on their death march with their hands tied behind them, standing firm on the promises, that cannot fail, they walked that plank up to the top of that furnace, when the intense heat was so great until the men that was behind them, it slew their bodies, who had been fed on the king’s wine, and his beers, and all of his fatness of his land. And these people had pulse to eat; their little frail body wasn’t nothing in physical match with the bodies that were behind them.But man is not judged by how many muscles he’s got; man is judged by character. I’ve seen men that weighed two hundred pounds and didn’t have a ounce of man in them. Man is measured by character.

E-16 And as the reason that heat didn’t scorch those little brown Jewish bodies, God was in them hearts a beating. That made the difference. The Word was anchored in their hearts. "In the beginning was the Word; and the Word was with God; and the Word was God. And the Word was made flesh and dwelled among us."And as they walked that death march, one looking to the other, up at the top of the plank just before they was to step in, it looked like the darkest hour that they had ever come to. And just as their darkest hour come, that they made their final step down into the fiery furnace, then Jesus came along.That’s the way He does, just in the darkest of the hour. There’s only one thing we have to do, and that’s stand on God’s eternal promises. Regardless of what comes or what goes, stand on the promise. Darkest of hour, and then Jesus come along.

E-69 Now look, has He proved it? First His Word said so; then He come; He moved through the audience, showed signs and wonders that He was alive. Then He… I made a call, ‘cause He told me too. I made an altar call. Last night I didn’t. Tonight He told me to do it. When I made the altar call He said, "There’s people to come." I made the altar call. "No man can come to Me, except My Father draws him first." Is He here? Certainly. "And all that comes to Me, I’ll give them Everlasting Life, and will raise them up at the last day. He that heareth My words, and believeth on Him that sent me, has Everlasting Life, and shall never come to the judgment, but is passed from death to Life."

E-70 You come because you have been warned of God; you’ve accepted it. And you when you come here, and bow your heads, and surrender to God, and repent of your sins, you are borned again. You’re a candidate then to be baptized into the Church by the Holy Ghost, into the Body of Christ. There’s only one baptism; that’s Holy Ghost baptism. "By one Spirit we are all baptized into one body."