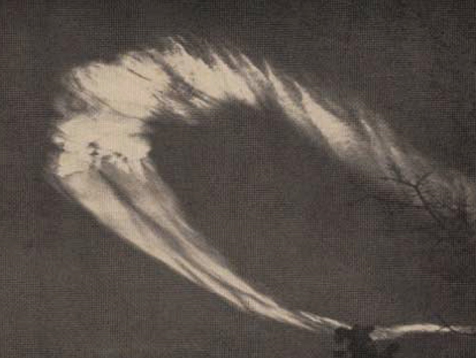 The Magazine about The Weather

Cloud-Ring in the Upper Stratosphere

At sunset on 28 February 1963, observers scattered over an area of nearly two hundred thousand square miles in the Southwest witnessed a strikingly beautiful cloud display. After three months of effort to determine just what it was that caught their eyes, I am still not sure myself, though the number of pertinent clues has now grown fairly large. Many persons at first thought it just a large contrail, as I did when first viewing it from Tucson. But the clue to its extremely great height came quickly as the setting sun’s rays left darkening high cirrus clouds far to the west (!), while the ring still shone with a beautiful luminescent silvery cast.

From quick computations based on the sunset geometry (the ring went dark at about 1850 MST), I estimated its altitude at over 30 km, and immediately put out an appeal through press and radio for observers’ reports. In all, some 200 reports were ultimately received; and subsequent press appeals for photos has led to a total of 85 photos from 35 different localities for photogrammetry use. It is now known that the ring lay at an altitude of 43 km above sea level (to within a present uncertainty of only about one kilometer), which is far higher than the 20-30 km range of Arctic nacreous clouds. It was nearly overhead at Flagstaff, Arizona, at about 1840 MST, and many excellent photos showing the cloud’s unprecedented variety of internal wave structures have been received from persons in that area. Its north-south extent was over 50 miles, and its east-west width was around 30 miles. Like a huge doughnut, its center was open.

Although, to most observers in Arizona, its color appeared silvery white in the twilight sky, most observers in New Mexico reported iridescence. It was seen in Arizona, Colorado, New Mexico, and even northern Mexico (Juarez, about 380 miles from the southern tip of the cloud-ring). In one report after another, I read the observer’s emphatic remarks to the effect that, in a lifetime of cloud-watching, he had never before seen a cloud as beautiful as this one. (continued on p. 148)

What was it? I’m still trying to answer that. It was far above the upper limit of contrail formation. No X-15 flights were made that day, and it lay well above my thermodynamically estimated upper limit of 27 km for the maximum altitude at which the ammonia and liquid oxygen rocket motors of an X-15 could form contrails.

No Nevada Test Site activity occurred that day, and nothing else turned up from inquiries at a number of other Southwest defense bases. However, a brief press account of the intentional destruction of a rocket over Vandenberg AFB, Calif., that day led to inquiries that are still continuing at this writing

The Thor booster of a military satellite-launch was detonated at 44 km at 1352 PST almost directly over Vandenberg AFB. To account for a drift of 510 miles to Flagstaff in time to have lowered the jaws of Flagstaffians looking straight up at 1840 MST, calls for a mean drift speed of 135 mph. Inquiries at the White Sands and the Pt. Mugu Missile ranges have yielded meteorological rocket winds for times about a half-day before and after the detonation event. The rocket winds are generally a bit too low to fit well; however, the Pt. Mugu 140,000-ft winds the following morning were 127 mph from the west. My own photogrammetrically estimated cloud-drift speeds fall below 95 mph when the cloud was over northern Arizona. I am hoping that phototheodolite films from the Pacific Missile Range may finally fill the gap in wind data by showing the initial drift speed and direction of the explosion debris itself. A number of other related questions are still under study.

The ring-cloud over Flagstaff is flattened by perspective into a long thin loop in this photo by Lynne E. Cobble, taken at Albuquerque, N.M., some 280 miles from the cloud. Intense low-angle forward-scattering by the cloud particles (presumed to be water or ice) creates strong contrast against the twilight sky. Sun had set at Albuquerque almost a half hour before this photo was made at 1840 MST. Kodak Retina Reflex camera F4 1/8th of sec. with 135mm telephoto lens.

Photo courtesy Sgt. Arthur A. Francis, Kirtland AFB, who is making a study of the phenomenon. The cloud lay right at the base of the "region of exclusion" for water drops and ice particles in that layer (about 42 to 65 kms, on the average), where temperatures are so warm that saturation vapor pressures exceed ambient pressures.

If this was, in fact, the aftermath of the Thor explosion, persistence of a circulation and of condensate for nearly four hours of downwind drift will be of considerable meteorological interest. If it was not due to the explosion, then the mystery will be back where it started at sunset on 28 February. 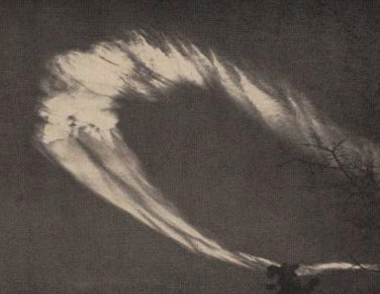 (Please note, this photo reproduction is black and white, the portions of image that may appear discolored, or brownish is due to age of the photo scanned, which is an actual magazine reprint of 1963.) 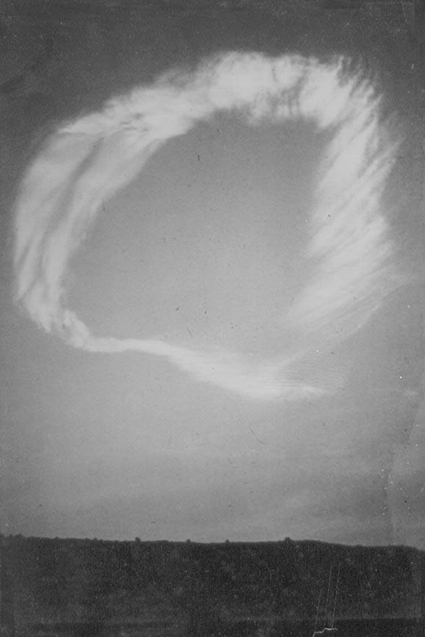