Tremor of land is felt in Sao Paulo 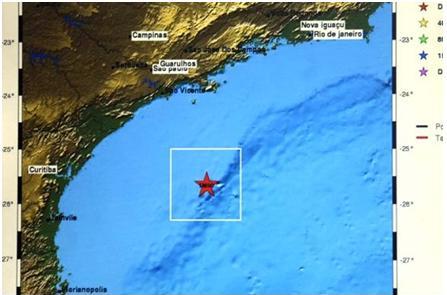 Tremor of land is felt in Sao Paulo

A tremor of land was the sense around 21h this Tuesday (22) at various points in Sao Paulo and cities in the inland and coastal areas. The Fire Brigade in the capital reported that the tremor felt in the building of the corporation.

According to firefighters, several links to various points of the city were registered with the withdrawal of the tremor. Reported that the Military Police received several calls from the region of Santana, Cerqueira Cesar, Avenida Paulista and airport, with reports of people who felt the buildings where were tremble.

The intensity of the tremor was 5.2 in Richter magnitude Scale.  In some points of the capital, residents reported that the tremor lasted about 30 seconds.

Residents of Santos, Peruíbe, St. Bernard and St. Caetano do Sul and Limeira also experienced the phenomenon. The coordinator of the Centre Sismologico the University of Brasilia (UNB), George Sand, said the earthquake was actually centered in Sao Paulo but the earth was quaking in the States of Paraná, Santa Catarina and Rio de Janeiro.

He said that it may be reflection of an earthquake stronger in another country in South America or even an earthquake localized, as has been recorded in the decade of 20 in the interior of Sao Paulo.

“God, we say, "Send Jesus quickly. Come, Lord Jesus." And now we see nature, the very sign like the star that led the wise men to Bethlehem, on the move again. Jesus said there'd be perplexity of time, distress between the nations, signs in the heaven and earth, sea a-roaring, great storms and tidal waves and earthquakes in divers places. These things are just… They are buzzers that sets our hearts alarm, Lord, that we know to be ready. We don't know what minute or hour He might appear.

“For we know that the whole creation groaneth and travaileth in pain together until now”.

320-It was a city of earthquakes, such earthquakes as finally destroyed it. This age will end in God shaking the whole world that has gone off to make love with the old harlot. Not only will world systems crumble, but the very earth will be shaken and then renovated for the millennial reign of Christ.