After all believe or not at opening of Seven Seals?

God sent us a prophet in these last days. He was William Branham. His ministry RESTORED the apostolic faith, FINISHED the mystery of God, and is calling the wise and foolish virgin OUT from all man-made religions. But because so many ministers and church members are too lazy to search the Scripture for themselves, as Jesus admonished, they end up following man-made traditions, and when God reveals more Light on His Word, they reject or find fault with It. God then removes their names from the Book of Life, and they become reprobates, justifying their own sin by persuading others from the truth. According to I Thessalonians 4:16, Christ's Coming is in three stages. First, the "Shout" of Brother Branham's Message calls the wise and foolish virgin OUT from all denominations, baptizing them into Christ which is the new birth (Matthew 25:6; II Thessalonians 2:1; Revelation 18:4). Second, the "Voice of the Archangel" which is Christ in the heart of the Bride, confirms the Message from Genesis to Revelation. This brings the wise into maturity in the unity of the faith, for the manifestation of the Sons of God, and the translation. Third, the "Trump", marks the end of the Gentile dispensation. The sleeping saints resurrect, and the living saints change in the atoms. We unite with them to "meet Jesus in the Air", and this is when His coming is COMPLETED.

Now we do know the month and the week in which He'll meet His Bride in the Air. The Bible tells us this. It will be, "when the day of Pentecost is fully come" . . . again. Brother Branham didn't say His Coming would be in 1977. He came in 1963 and He is here NOW, in Word Form. His Coming will be COMPLETED when the day of Pentecost is fully come. That's when we "meet Him in the Air". Brother Branham was the angel to the Laodicean, or Seventh Church Age which ended in March, 1963. That's when Christ's mediation was complete, Revelation 4, 5 and 10:1-7 were fulfilled, and the Seven Seals revealed. The revelation of the Seven Seals brought Christ back to earth in WORD Form.

The Man Jesus didn't return. The anointed WORD came back through the mouth of God's prophet. Did you hear that? Paul said, "When that which is perfect is come, that which was in part will be done away." Now that we have the fullness of the Word, Christ is no longer mediating for part-Word.

28-8 “What did He do? He opened up the Seven Seals of the last message. Did you notice that? The Seven Seals, which all the mysteries of the Seven Church Ages were sealed with Seven Seals. The reformers didn't have time to do it in their days. They didn't live long enough. But this blessed revelation of the Seven Seals is opened to us in this last days from a prophecy that went forth to Arizona. How I asked God the other day, "What are You doing with me out here in this desert?" Did you know Moses wrote the New Testament, or Old Testament? He certainly did: first four books gives the laws and everything: Genesis, Exodus, Leviticus, and Deuteronomy. He wrote the Old Testament. To do that he had to leave all his associates and loved ones and go into a desert. 29-1 Paul wrote the New Testament. That's right. He wrote Romans and–Romans and all the rest of them there, a Hebrews, and Timothy, and so forth. And to do that, he had to separate from hisself and go down into Arabia into a desert for three years and get the revelation of God. Oh, you say, "What about Matthew, Mark, Luke, and John?" They were scribes that just wrote what Jesus did. Paul separated and put the Word together. That's right.Well, then, look if it taken that, and he had to go to a desert away from their loved ones… You remember "What–What Time Is It, Sir?" How many ever heard it, say, "Amen." Was it exactly right? Then we've got the revelation in this last days for the message of the Lord God to gather His Bride together. No other age has it been promised. It's promised in this age. 29-3 Malachi 4, Luke 17:30, St. John 14:12, Joel 2:38. Those promises is just exactly like John the Baptist identified himself in the Scripture. Jesus identified Himself, what did they say? "Away with such a person. John's a wild man." The church wasn't able to receive it. That's the pattern. Neither will the church receive it today. But to the elected, God's calling. To the elected, they know it. Calling the virtuous Bride, the Word, the last day church, the elected Lady of our Lord Jesus Christ, Word. If Jesus is the Word… How many believes that? All right. Then the Bride is always part of the Bridegroom. So the Bride will not be a denomination; it'll have to be the Word manifested to be the Bride of Christ. He promised to do it. He said how He'd do”.

“God's able to do great things if we'll just listen at Him. See? He–He'll make He'll make ways where there is no way” 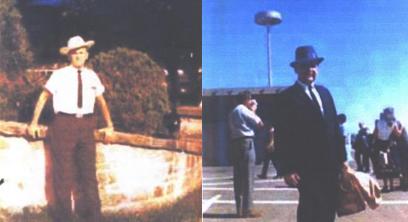