The realization that we are NOT denominationals, terminated the world systems and is ushering-in the Millennium. The Millennium is a restoration back to Eden for the Honeymoon of the Bride and Groom. If you read Acts 3:21 you'll see that before the PHYSICAL conditions of the Millennium can be restored or ushered-in, the Word "spoken by the mouth of all God's holy prophets since the world began", the fullness of the Word, which is Christ, had to be restored FIRST. Then RECEIVED by faith, before it could manifest in the physical world.

“Then I seen the United States as one smoldering, burnt-over place. It will be near the end. (Then I've got in parenthesis: "I predict that this will take place." Now, remember, the Lord ne… That's what the Lord showed, but "I predict this will take place before 1977.") Upon this prediction, I base, because of the onrushing slaught that's coming now, how fast that it was moving, how long it'll take till this nation meets its place”.

Then I turned to look and I seen the United States was a smoldering something had burned it up, and down beneath there I said (not in the trance) but I predict… Remember this. I guess this is taped too. I predict that these things will take place between now 1933 and 1977 which will give us sixteen more years if my prediction strikes right.

46 Then after the Ephesian Church Age, from A.D. 53 until A.D. 170, then started in the Smyrna Church Age which lasted from A.D. 170 until A.D. 312. Then come in the Pergamos Church Age and the Pergamos Church Age begin at 312 and lasted till A.D. 606. Then come in the Thyatira Church Age, and the church age of Thyatira begin at 606 and went to 1520, the dark ages. And then the Sardis Church Age begin at 1520 and lasted till 1750, the Lutheran age. Then from 1750, the next age come in was the Philadelphian, Wesley age; that begin at 1750 and lasted till 1906. And at 1906 the Laodicean church age set in, and I don't know when it'll end, but I predict it'll be done by 1977. I predict, not the Lord told me, but I predict it according to a vision that was showed me some years ago, that five of those things has (out of the seven)–has already taken place about…

We believe that the Laodicean church started in A.D. 1906. I predict… Now, remember, "Predict," especially you listening at the tape. I don't say it will be, but predict that it will end by 1977, that the church will go completely into apostasy, and she'll be ousted out of the mouth of God. And the second coming, or the rapture of Christ, might come anytime. Now, I could miss that a year; I can miss it twenty years, I could miss it a hundred years. I don't know where. But I just predict that according to a vision He showed me, and taking the time, the way it's progressing, I say it'll be sometime between '33 and '77. At–at least, this great nation is going to strike a war that's going to blow it to bits. See? Now, that's pretty close; it's awful close. And I could be wrong; I'm predicting. Everybody understand say, "amen" if you do. [Congregation says, "Amen."–Ed.] See?

196 Now, counting the time, we find that we have exactly (Listen.) seventeen years left, and we will have the same span of time given to us as God dealing with us in the power of the Holy Spirit since A.D. 33 until 1977, the same span of time of 1954 years. God deals with us the same as He did with the Jews. See? How about that? Now, mark down in your book a little Scripture here I want to give you. Leviticus 25, begin with the 8th verse. God calls a jubilee every forty-ninth year; the fiftieth year was the jubilee. We know that. We understand that. From the first jubilee of Leviticus 25:8, in 1977 will be the seventieth jubilee, making exactly 3,430 years. Jubilee means the going up, the release.

199 Now, listen. To you old-timers here in the–in the church that's been here for a long time, I want you to notice something. I never learned this until yesterday. I picked it up from historian, Paul Boyd, and then–and I traced it back through the Scriptures, picked up these other dates here, and so forth, and got it, and run it–traced it through. Now, in 1933 when we were worshipping over here in the Masonic temple where the Church of Christ stands today, on one April morning before leaving home, I was dedicating my–a car (I got a '33 model car, and I was dedicating it to the Lord's service.), and in a vision I saw the end time. Now, notice how striking this is. Back yonder when I was just a boy, and you can imagine what a 1933 model car looked like–now, what it looked like. And I went over there to the Masonic temple where… Some of you old-timers in here remembers; it's wrote down on an old paper at home. It's already in print and went out around the world. See? That was in 1933. And I predicted that there would be some great tragedy happen to this United States before or by the year of 1977. How many remembers me saying that? Look at the hands. Sure.

212 Now, then after that, I turned and looked, and I saw this United States burning like a smolder; rocks had been blowed up. And it was burning like a–a heap of fire in logs or something that just set it afire; and looked as far as I could see and she'd been blown up. And then the vision left me. Five out of the three has happened–five out of the seven, rather, has happened. And here comes around and shows, and then I predicted… I never said the Lord told me that, but standing that morning in the church, I said, "The way progress…" I got back to one end of the wall and run to the other end of the wall, and I said, "The way progress is going on, I'll predict that the time (I don't know why I'm saying it.)–but I predict that that'll all happen between right now, 1933, and 1977. And not knowing it, God knows my heart, I never knowed it until yesterday, that 1977 is the jubilee, and exactly the same amount of time run out that He give with Israel and everything at the end. So we're at… And here we are at the end of the age, at the coming in of the seventieth week. We don't know what time that the church will be gone. Oh, my. What can we do, friends? Where are we at?

226 Now, what's the next thing? The Seven Seals now. We drop right in on them when the Lord will permit. When that'll be, I don't know. Just whenever He delivers it, then we'll go right into it. Then we're going to have a long, long meeting, 'cause we're going to take from the 6th chapter through the 19th to get through it. And as slow as I am with it…Now, I do not want anyone to go away misunderstanding this. Tape's still playing? I don't want anyone to misunderstand it. Don't misunderstand now, and say, "Brother Branham said Jesus will come in 1977." I never said no such a thing. Jesus may come today. But I have predicted that between '33 and '77 something would take place, that these things that I seen come to pass in the vision would take place. And five of them has already took place. 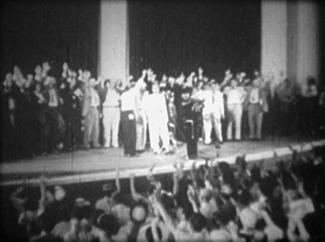 Speech is silver, but silence is gold.

"Faith" is a clear understanding of the revealed Word of God – what it MEANS, not what it SAYS. Faith is the mind of Jesus Christ in us. It's the perfect interpretation of God's Word. That's what we must apprehend: agreement with the Bible. Any true revelation of God's Word or true ministry will be according to the Bible from Genesis to Revelation. 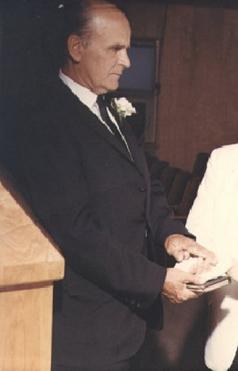